A Coaching Structure is a framework to support a structured approach to coaching. It defines a way to prepare and execute coaching activities by starting from Observations and moving on by identifying what behavioral Goals, as coaches, we would like the coachee(s) to achieve. The fundamental believing behind it, is that the only way to improve a situation through coaching is by helping improving the behavior of the people involved, only that will allow to establish a sustainable and long-lasting change.

The Coaching Structure is also implicitly a way to coordinate coaching efforts between different coaches (and possibly involving also the ScrumMaster of the team at a later stage). The need of a coaching structure stems from the need of having a more holistic approach to coaching which goes beyond natural evolution assistance but really tries to challenge the assumptions and constraints in which the coachee(s) is at a certain stage, and by guiding him in a direction which, as coaches, we deem more appropriate for improvements. Sometimes it is about exposing issues, visualizing them, questioning a solution or a direction and stimulating the identification of alternatives options.

The Coaching Structure is a key component in the Team Coaching Framework™ (TCF) that agile42 coaches use for clients and teach to new coaches. 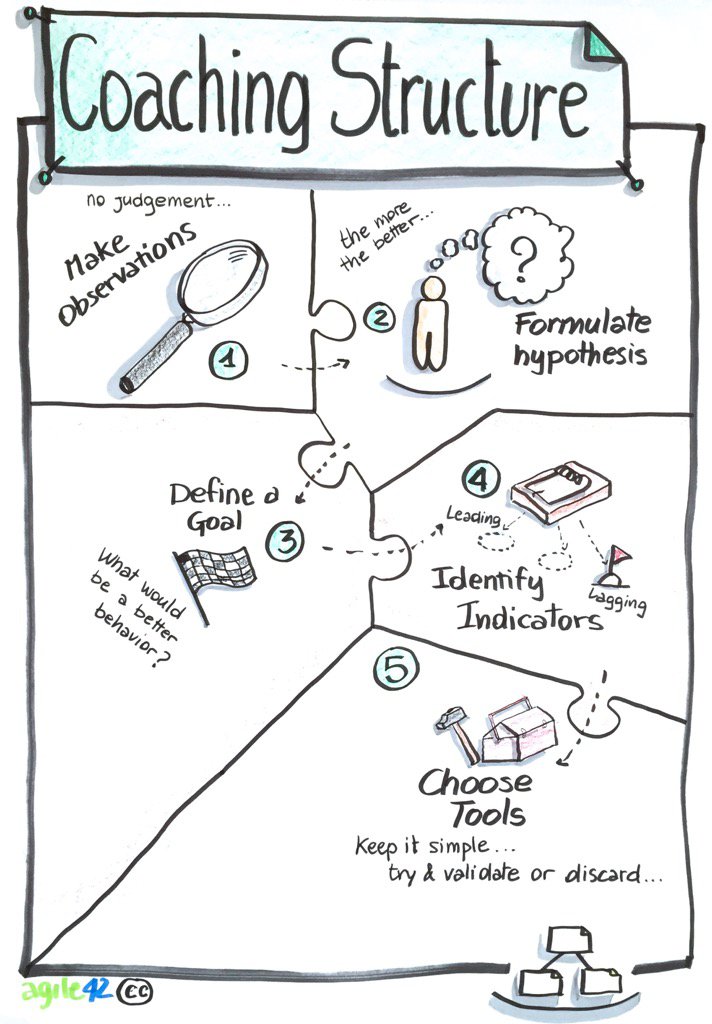 Contrary to systemic coaching, agile coaching does have an Agenda, and everything needs to fit into the frame of values and principles which are highlighted in the Agile Manifesto and in other literature.

So in a nutshell Agile coaching is about:

2. Elements of a Coaching Structure

An agile42 Coaching Structure is composed of Coaching Cards each of which entails the following elements:

In order to be able to describe a Situation in an objective and analytical way we need to focus on the fact and avoid being judgmental. It is very common to describe a Situation and immediately express our judgement and opinions about it, avoiding to capture all aspects of it. To help understanding what to do, and provide adequate support to write Hypothesis it is important to provide a couple of paragraph stating who is involved, how is the environment looking like, what are the highlight of the situation observed, without adding any opinion nor reasoning. It is also very helpful to state explicitly all the assumptions which are being made, as well as the unknown (this helps reflecting deeper later on, and find out what Hypothesis could be pursued and which ones instead is better to leave behind). The best moment to collect observation is directly when the actions happens, in the form of jolted notes first, that can be structure and condensed later on, outside of the action, when you can concentrate and connect the dots.

Once the observations have been structured into a couple of statements describing the current Situation, it is time to start formulating Hypothesis. It is better to perform this task with a fresh mind, and not within the environment in which the situation is presenting itself, unless further observation are necessary to validate the first impressions. This will help structuring the approach to coaching and separating the moment in which we need to collect everything which happens in the environment, trying to judge as few as possible, from the moment in which we need to reflect and make sense of what happened.

It is important to formulate Hypothesis based on the observations and the description of the situation, rather than using the tacit knowledge that we have about it, and that we didn’t explicitly capture. This is going to be extremely helpful when asking for peer review or even when co-coaching. Another important advise is never be to eager to discard Hypothesis without having validated them. We often tend to discard the most obvious Hypothesis and searching for more complicated reasons, based on assumptions rather than validation. To validate Hypothesis it is sometimes necessary to use Coaching Tools (see below).

The observations about different behaviours need to be made in relation with the Agile Principles and Values framework that we are trying to support through the transformation of people mindset toward a more “agile” one.

Sometimes teams are manifesting a Positive behaviour without realizing it, but just because it feels the natural way of doing things in a specific context. If that is the case, as coaches, we do not want to miss the opportunity of validating this behaviour with the team and allowing them to realize its positive impact on their work, thus finding a way to persist it in their way of working (this is normally captured in a Working Agreement). The Goal we would define in this case would focus on emphasising the Positive behaviour and focusing the Team attention on it, accelerating the understanding about its importance, which would probably lead to a change in the team’s Working Agreements.Related to Negative behaviours, we need to formulate hypothesis on why that behaviour is manifesting itself in the Team (sharing observation with other coaches is extremely helpful in getting insights) and consequently model a Goal which would entail a Positive connotation, and would highlight a possibly balancing behaviour deflating the Negative one we observed.

Metrics are not Key Performance Indicators (KPIs), they are simply a way to be able to measure the effectiveness of coaching. We do not need fixed numbers to measure that, but it is important before starting doing something, to have in mind what problem are we trying to solve – by doing whatever we decided to do – as well as how are we going to know that what we are doing is working – meaning we need to have some indicators.

Coaching tools are tools which are encouraging if not forcing certain type of mechanical change in the way of working. Through the changes in the mechanics, or the constraints, we can predict the changes in behaviour.

We need to create a mapping between the tools (which need to be documented briefly) and their usage, to facilitate the choice. At the same time, based on experimentation we might identify better mappings, and refine them over time. Coaching tools can be used in different ways, to achieve different goals, but it is important to provide information about how to use a tool, and what could be the expected outcomes, based on real experience and situations.

Finally a Coaching Structure it is nothing more than a set of Coaching Cards with explicit dependencies and organization. The aim of the coaching structure is to avoid to start from the wrong place, and also to avoid trying to achieve too many goals in parallel, putting the team under potentially concurring goals, and thus delaying the understanding and the improvements. It can be represented as a simple backlog, but normally it is more of a graph or map, as dependencies tend not to be linear, and Coaching Card are often building on each other in more directions.

Remember that a Coaching Structure as well as individual Coaching Cards are never right or wrong, as they are meant to provide guidance to our thinking and coaching approach. This means that it is perfectly normal to update them frequently – especially at the beginning – when we are still trying to understand a situation and formulating hypothesis. The first set of Coaching Tools we define, might be aiming at validating the Hypothesis themselves, rather than changing the behavior. Once we have validated the Hypothesis though, the Coaching Card should evolve towards the behavioral change, and so should the metrics: Leading and Lagging Indicators, and the Coaching Tools.

This work is distributed free of charge under a Creative Commons Attribution-NonCommercial-ShareAlike 4.0 International License and it is intellectual property of agile42 International GmbH. Shortly means you can use it for free, you can’t resell it and you are required to share any further modification with the same license format. Read more. 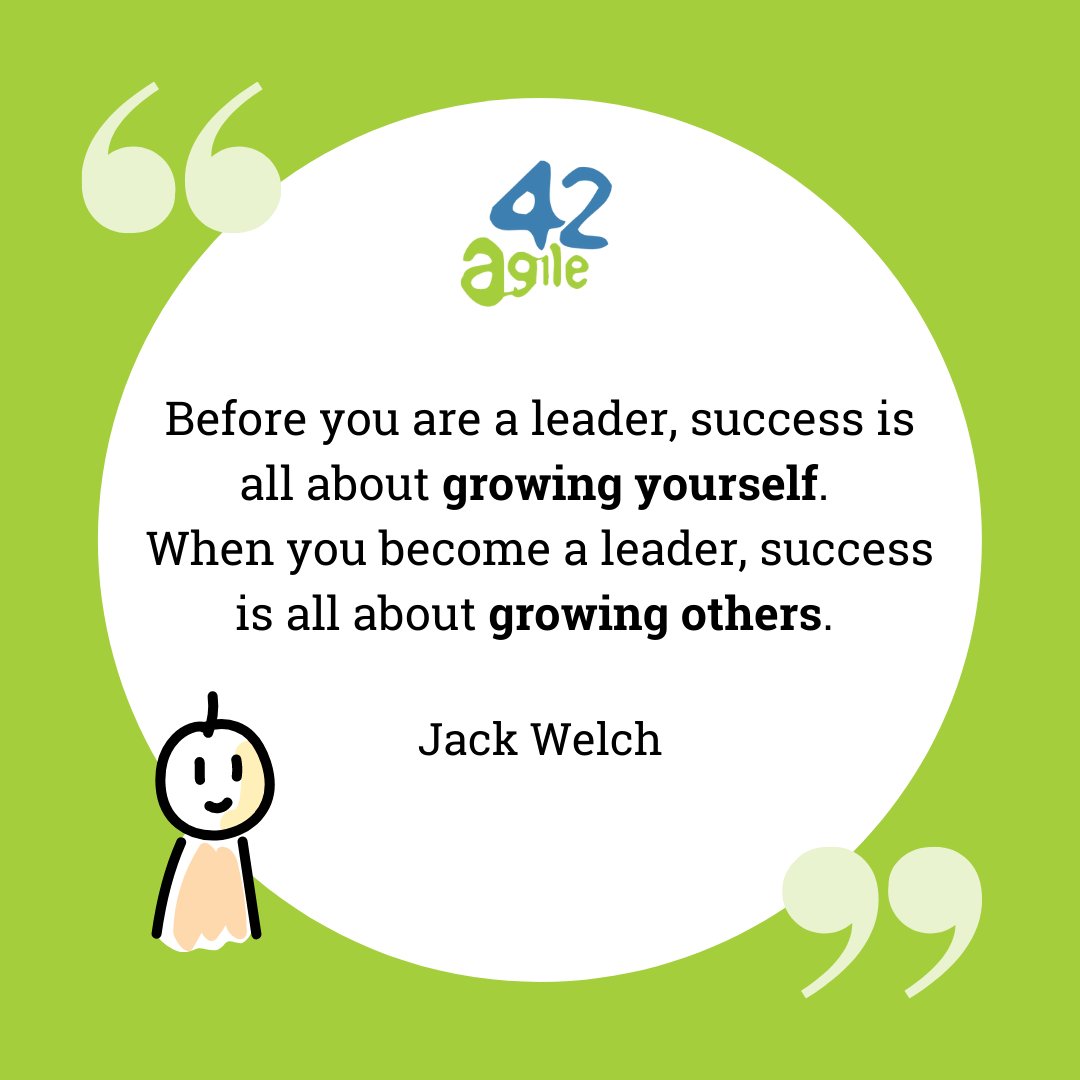