agile42 is proud to present a new TV series format: Scrum Survivor! Three software development teams of 7±2 people will battle it out on reality TV. Who will be the winner? Read on for an exciting behind the scenes interview. 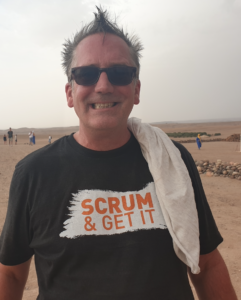 “Scrum has achieved global name recognition by now,” says the executive producer of the show, Niels Verdonk. “With software taking over the world, everyone knows what Scrum is about! There’s an immense pent-up demand — millions of people will want to watch geeks argue with Product Owners on live TV.”

The director of the show, Daniel Lynn, nods in agreement. “It’s all about ‘individuals and interactions’,” he says, inserting the inverted commas with a flourish. “Just like in reality TV. Lots of synergies here, and we think this adaptation will work out very nicely.”

“We are setting up three teams now for this spring season that starts on April 1, 2021,” Niels confirms. “The teams will be named Node.js, C++ and The Pythonistas according to their programming languages. We had plans to line up a fourth team too, COBOL, but it kind of died out.”

According to Daniel and Niels, Scrum is a great method for this project. “There’s just so many meetings all the time!” says Niels. “Plenty of opportunities for people to meet and talk and discuss and move notes. Post-it notes.”

“Yeah, and then drinks on Zoom after work — bring your own beer! It’ll be so much fun”, Niels beams. “And then we’ll be taking each developer aside to put their suspicions and reactions on film.”

Success in the game is based on delivering working software every sprint, of course. Also compliance with the Agile Manifesto will be closely monitored and measured. After each Sprint, the team delivering the fewest story points will be forced to vote out a team member.

“There’s got to be some tension in the team, obviously,” explains consulting agile coach Martin von Weissenberg. “Otherwise they’ll get complacent.”

The discussion on how to measure productivity was quickly resolved using Full-Violence Communication. Based on Lothar’s very convincing argumentation, the producers accepted story points as the metric. “The C++ team wanted to do the estimates themselves — they almost had us there,” laughs Lothar Fischmann, who will play the role of Product Owner on the show. ”All estimates in the show will of course be done by the Product Owner, just like in reality.”

The producers are aiming for the teams to complete a number of common challenges, brainstormed by experienced agile42 coaches. One of the first will be to get some training and coaching. “That’s just a simple warm-up exercise. And a trap, of course,” sniggers Martin von Weissenberg. “Any team that goes for the training and coaching will find the other teams already coding away like there’s no tomorrow.”

According to Niels, the teams will be closed down after the season is done anyway, so training them would be a waste of time and money. “But sure, we can send a couple of people to a CSM. If they ask for it. Or buy a few books perhaps.”

How to integrate the immunity amulet is still up for debate, however. Initially the producers were leaning towards giving the amulet to the most productive developer after every sprint. However, installing a proper source code versioning tool to keep track of things would just add to the overhead. “So we’ll just have the Scrum Master nominate ‘the coder of the week’ or something like that,” Lothar explains. “It’ll work out fine, I’m sure.” 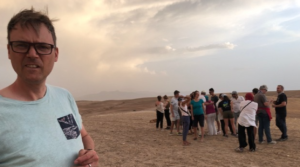 Normal work will proceed in the usual way, we’ve learned. The production team went to great lengths to ensure a good, workable backlog. First they copied the list of customer requirements into Jira. Then they started generating insights with all stakeholders in a long series of in-depth, synergistic workshops.

“We added estimates, story points, hours total, hours remaining, projected increments, and suchlike,” Lothar clarifies. “We also filed all 479 backlog items as priority 1 and then flipped the ‘Mandatory?’ dropdown to ‘Yes’ for all of them, so that the team knows it’s all in the contract and not optional in any way.” Martin agrees: “What if the teams left something out, or went and built something that the customer hadn’t agreed to pay for? We would all feel so stupid.”

For the Scrum Master, the team considered a number of high-profile actors — with the additional intention to draw in an extended audience. Early talks with George Clooney floundered, as he was just too likeable for the role. The producers warmed to Jack Nicholson, who, as Daniel put it, “had the right kind of gleam in his eyes.” In the end, they decided that having a dedicated Scrum Master was just a waste of time, so one of the developers will have to volunteer 50% of their time.

“That’s how it’s done everywhere nowadays,” says Martin. “And I ask you — how much time does it take to send out those meeting invitations anyway? What? Yes, well, with all those meetings it will add up I suppose. But even so. Can’t take that much time.”

In a move that has been criticized strongly by many fans in the Agile community, all sprints will be synchronized and pooled up into product increments. “I don’t see what the problem is,” says Daniel. “This is just common practice across the industry. We can’t have one team go off and deliver earlier than the others, can we? Or work in different Sprint lengths? We’d have the customers running around here every day!”

Martin agrees. “Scrum teams can start delivering twice the stuff in half the time, so you will need to slow them down,” he says. “It’s common sense really — just introduce some kind of framework and they’ll be back in lockstep before you can say... um, whatever the framework acronym stands for. If that isn’t agile, I don’t know what is.”

There have been rumors that the lead agile coach, Andrea Tomasini, resigned from the job on the first day. We asked Niels Verdonk if he had any comments on this. “Absolutely untrue! He didn’t storm off and slam any doors at all,” says Niels. 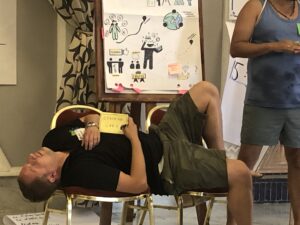 “Rather, just after we finished presenting the setup to him, he had an unfortunate attack of dizziness and needed to go for a stiff drink and a lie-down,” Daniel explains. “The doctors say it’s an advanced case of over-agile thinking. We wish him all the best and hope for a quick recovery. They said they’ll let him out of the padded room within a few months, tops.”

And what kind of reward will the winner of Scrum Survivor get? "Reward?" asks an astonished Niels. "Oh yes, the Survivor will get some heartfelt thanks from the CEO and probably a small gift, like one fine crystal champagne glass. Isn't that customary after a project finishes?"

"Yes, one of those expensive artsy pieces of glassware that you wouldn't buy even if you could afford them, and then you'll have an odd number of them ever after," Daniel explains. "Oh yeah, and they'll still be employed, obviously. Should be grateful." 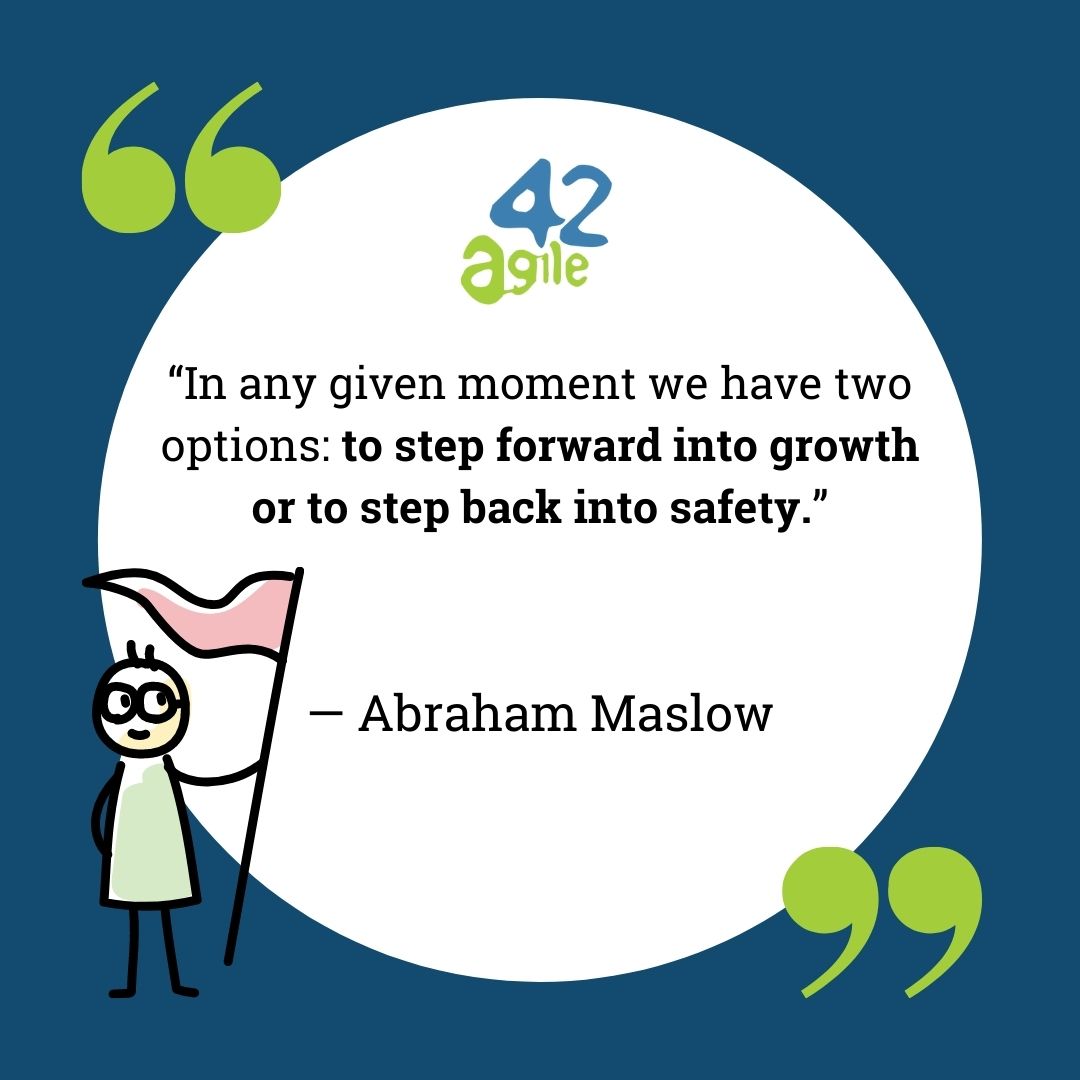 agile42 · Wednesday, January 19th, 2022 at 5:00am
@agile42
Don't miss out on our free #webinar taking place tomorrow. Our coaches will equip you with all the info you need to reach the next step in your #Agile journey, and they'll answer your questions about your next steps.

agile42 · Tuesday, January 18th, 2022 at 7:01am
@agile42
Here's a round-up of our #Scrum courses in 2022. Our highly interactive and engaging courses are the best way to earn your @ScrumAlliance certification.